A gentle introduction to Techbio

It has become increasingly obvious that computer science innovations are still needed to fuel the biotech industry. Techbio is a general term encompassing any startup serving the biotech industry through hardware and software-based support. Here are some of the major areas of the rapidly growing techbio industry. 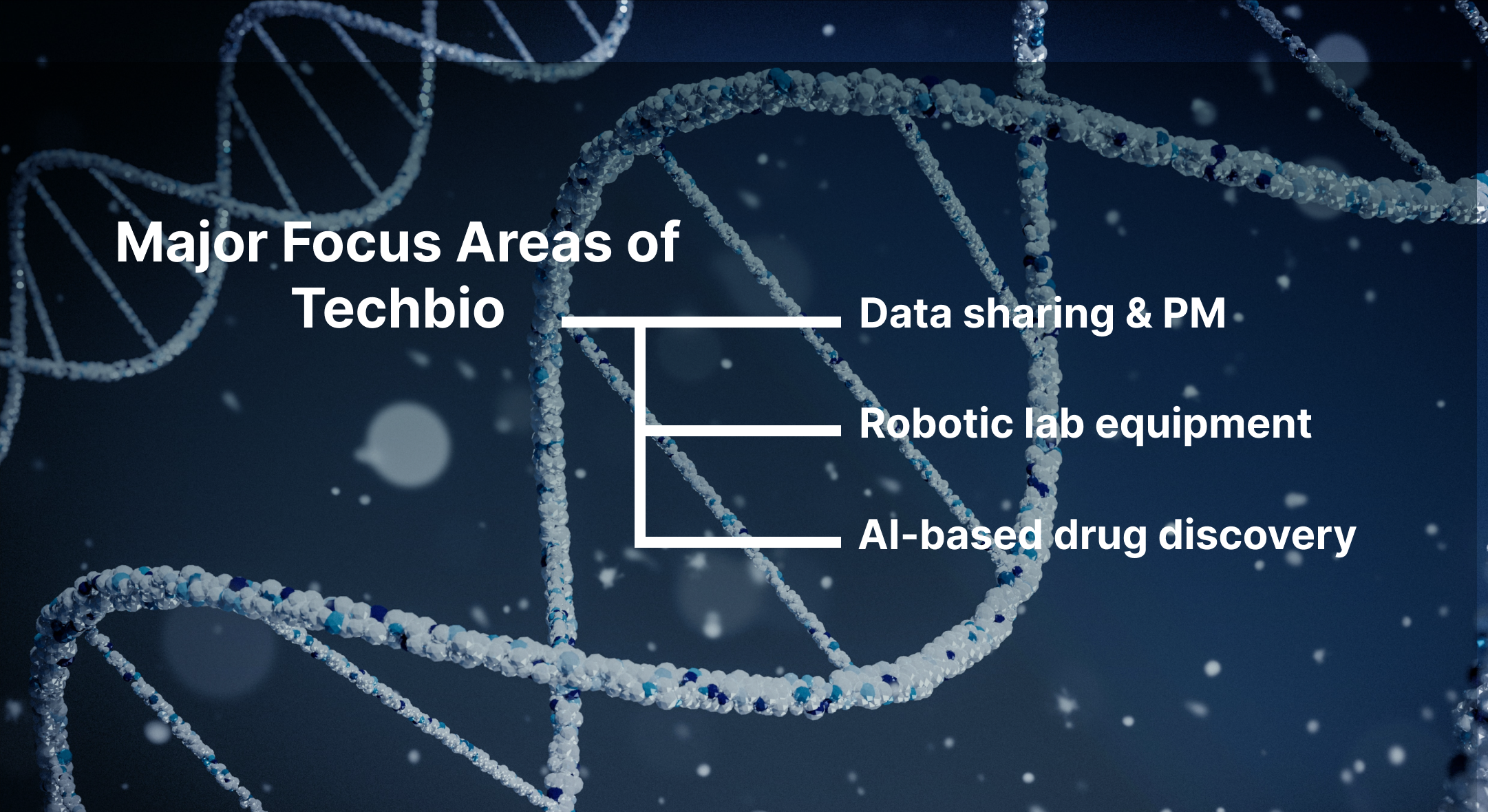 Research in the 1900s led to our first understandings of life at the molecular level – how genetic information is stored, how proteins are synthesized, how a single cell can divide to form an entire organism full of specialized tissues. We are now seeing all of this biological insight be put into action through biotechnology. Each year, dozens of new startups launch using foundational biological principles to tackle challenges in healthcare, agriculture, and climate change.

In many ways, the excitement around modern biotech is reminiscent of the energy felt in the 1990s toward new computer science startups. Modern tech giants like Apple, Microsoft, Amazon, and Google were all growing around the same time, propelled by a collective momentum that many feel in today’s biotech industry. “From bits to atoms” – this popular mantra attempts to bottle this electricity. It signals a shift from the time when new software dominated innovation to a time when the molecules of life can take center stage.

But as the biotech industry matures, it has become increasingly obvious that computer science innovations are still needed to fuel its development. Biological datasets are large, multidimensional, and difficult to predict. Addressing these challenges has led to a rise in what is being called Techbio – the computational flipside of biotech.

What is techbio? It is a general term encompassing any startup serving the biotech industry through hardware and software-based support. Here are some of the major areas of the rapidly growing techbio industry:

Biotech research is often team-based, requiring coordination among multiple scientists to reproducibly carry out experiments. The challenges of team coordination apply to many industry settings, but biotech is unique for its use of highly specialized protocols and data formats. A number of companies have launched to facilitate the work between biologists. Some of the biggest players in this space include Benchling, a cloud-based platform allowing biologists to easily share their lab notebooks, and SnapGene, a software that allows for easy visualization of all features related to DNA and molecular cloning.

Biological research is full of repetitive tasks. For all we have learned about biological systems, sometimes the only way through a biological problem is by screening a large number of conditions until a lead is identified. A number of companies have launched aiming to automate such processes. Companies like Covaris, Opentrons, and Vention provide a number of programmable robots that can assist in carrying out routine lab tasks. Taking robotization one step further, companies like Emerald Cloud Lab and Strateos offer cloud lab spaces, allowing a researcher to operate an offsite robot through their personal computer.

Biological data is large, complex, and highly context dependent. For decades this meant that biological insight could only be gained through direct testing of biological phenomena. But as our ability to collect biological data in a high-throughput manner has grown, so too has our ability to analyze it, and ultimately use that analysis to make predictions. A number of startups have launched in recent years aiming to employ machine learning (ML) techniques to increase the pace of biological discovery. One of the most common applications of this approach is the field of drug discovery. In the past, the efficacy of a drug against a protein target could only be determined experimentally. But as ML techniques have improved, the field has been able to use computation to increase the success rate of finding a molecule with the desired pharmacological properties. One of the most famous examples of the use of ML to address biological challenges is the recent success of DeepMind’s AlphaFold2 – a pipeline created to predict protein structure from its sequence. With our increased ability to predict the shape of proteins with such tools, many hope to accelerate the drug discovery pipeline by building better models of protein-drug binding.

The current state of biotech makes it clear that addressing the world’s biggest biological challenges will require biologists coming together with computer scientists. As the biotech industry continues to mature, computer science-driven techbio will be by its side, bolstering its development.